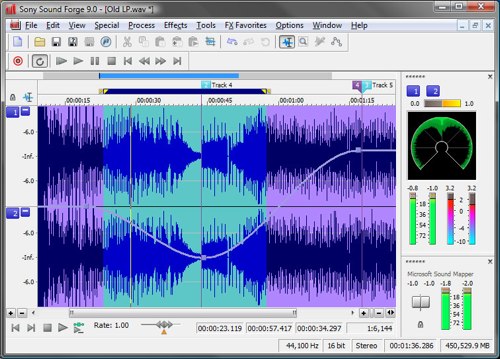 In the past I’ve talked about Steinberg and podcasting which dealt with their products, such as WaveLab. While most people might think about Playstations, TVs or even Walkmans if you were alive during the 80’s, when Sony is mentioned, they do have a foot in the pro audio world as well.

The Sound Forge family are standalone applications for recording, editing and mastering. In the past there was also a part called Sony Oxford that made plug-ins for DAWs and also a rather fancy console usually nick-named “the Oxford”. They broke up recently from the Sony brand though, and are now called Sonnox. So this post is about Sony Creative Software, the part that makes the Sound Forge products. There are three products that at the moment are a part of the Sound Forge family.

Sound Forge 9. The big cheese in this lineup. It’s not very expensive ($299) for a product like this.

Sound Forge Audio Studio is the little brother of Sound Forge 9. While there are differences in them, I think the biggest difference for someone making a podcast would be the tools that are available in Sound Forge 9 but not in Audio Studio. Sound Forge 9 for instance have additional tools made by iZotope and Noise reduction 2.0.

More on the Sound Forge family at Sony Creatives website