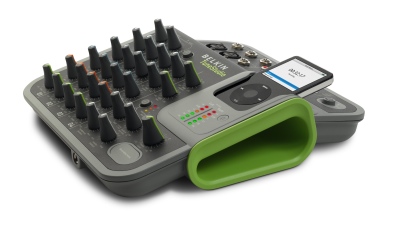 I just found out about the Belkin TuneStudio, and thought that it perhaps could be of interest to you loyal reader.

The Belkin TuneStudio for iPod is now available for purchase. TuneStudio lets you create high-quality digital recordings directly onto your iPod. This mixer allows the input of up to four different instruments or audio sources, and records the audio onto your iPod for instant playback.

Bands can easily attach instruments and microphones to TuneStudio and record jam sessions directly onto an iPod. Podcasters can also use this device to record their shows either in a studio or on location.

If we ignore the hype of the press release, then I must say that I’m split about the usage of a device such as this. A direct connection to an iPod is nothing new (see for instance Alesis iMultiMix), and it wouldn’t be my personal choice of medium to record to, but I can understand the purpose.

Now Available in the US with launches in Asia, Europe, and Australia to follow.

Acts as an external USB sound card, allowing the input of audio from a PC source as well as output to a PC from any of its connector inputs

It can record directly to iPod in 16-bit, 44kHz quality. Each channel is equipped with 3-band EQ, pan and level controls. Phantom-power-enabled XLR inputs provide up to 60 dB of microphone gain. It also has a stereo compressor, with a one-knob compression control.

On top of that, a really militant look!