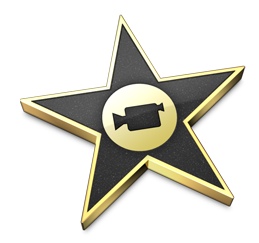 Anyone doing video podcasts here? Or thinking about it? In that case you should check out iMovie. It’s an incredibly easy way to give your video recordings a few basic effects. I tried it for the first time a couple of days ago, editing my video diary from Musikmesse.

It took a couple of minutes to get the hang of it, after all, I’m a total novice when it comes to video editing. And that’s just what’s impressive, that a total novice can learn it quickly. I guess it’s like GarageBand in that way. I definitely felt the limitations of it however, but I didn’t want to spend a load of cash on video editing software that I wouldn’t use very much anyway, so I just had to work around the limitations and make the best of it.

Here’s the three quick steps to make a complete movie (after you’ve taped it of course!).

Really quick once you get the hang of the interface… And a lot of fun too!

There are some downsides to it though. Namely the parts of Apple that I don’t like. Apple wants their iLife bundle to integrate with each other. That’s fine, in fact, it’s even good. When they decide that everything needs to go through the iLife apps however, it doesn’t make things simpler, it makes things harder by denying your own workflow. Why can’t I browse my disk for for files inside of iMovie instead of just the various iLife folders?

Lack of audio manipulation is another. It would be nice to be able to access effects within iMovie, even GarageBand effects would do. For instance, when I did a couple of videos that were taped at noisy places, I would typically apply a noise gate, some EQ, or whatever, to it. I could of course import the video and sound to my regular audio application and do it there, and then go back to iMovie, but being lazy and having little time I decided not to. Sure, every app doesn’t need to be able to do everything, but I mean the effects are already there in the iLife pack!

Other than that I can’t really complain. iLife is of great value for the money, and iMovie is a great way to start editing video. Now go make a video podcast!