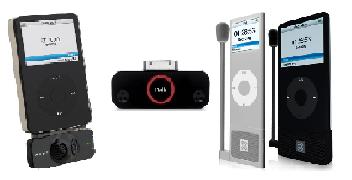 Ever had the urge to do a podcast in the most unlikely place without your PC, MIC and Software. Ever been caught flat-footed with the idea you’ve been thinking of for a whole week, but can’t seem to blurt out the words to make it enticing. Then these iPod Mics would make your day with both style and function. It was a long time coming, quality CD grade recording facilities for your iPod you’ve worked so hard to buy. There are a lot of aftermarket mics out on the market from the cheapest to the outrageously expensive but we’ll shake down three to make things easier for you to choose.
Belkin TuneTalk comes with a handy design that allows access to the iPod’s ports even with a protector case installed. Installation as with all are simple as a click. A small button on the stand places the mic on ready-mode but you have to fiddle around with the iPod’s wheel for actual recording. Sliders let you chose between two modes, auto gain on and auto gain off/line in with a teeny weeny led that signifies clipping(mic mute in case the sound input is loud enough to break it as built-in protection). The interface allows recording even with a charger attached giving life to an otherwise power hungry pod. The next contender is the XtremeMac MicroMemo that turns your iPod into a primitive looking wireless mic(the ones with battery packs attached used by field reporters of days gone by) but it only comes with a mono-aural mic that tends to play down the good-looks. More suited for recording memos on your desk and on the go notes, it can however suffice for primal podacsters with no other options at the time. The niftiest is the Griffin iTalk Pro, and it is as simple as they get and you get to record with the press of the iTalk’s button with the ring coming to life with the warm red glow. The only problem is that the mics are fixed and recording something you want to focus on can be quite tricky. Wrapping them all up, they all share one problem, the hum of the spinning hard drive which is quite annoying but rather than have nothing to catch the moment, better than none. What does it all mean, chose and get it for you can never find a perfect gadget that would give you the versatility of these small yet handy recording mics anywhere anytime(there’s an outlet, did we mention the utter short battery life of iPod’s when recording).