If you plan on doing any talking at all in your podcast a microphone is definitely a must. While you might have some crappy old thing lying around (or perhaps a computer with a microphone of it’s own), you will find that a proper microphone increases the quality drastically. For podcasting, I would say that you basically have two choices: a condenser microphone or a dynamic microphone. 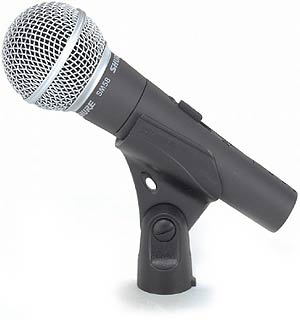 Dynamic microphones are often used for live work since they pick up less sound. This might sound like a disadvantage, but consider a noisy pub with a live band, you definitely don’t want all the bar chatter get picked up by the microphone and go out through the PA. I like these for studio recordings as well, especially on rock-type singing or for micing amps. They are traditionally cheaper than condenser microphones. For example, old classics like Shure SM58 (picture to the right) and SM57 goes for very little money and are classics any recording studio shouldn’t be without. However, this article isn’t about recording songs.

Condenser microphones (the mic at the picture at the top is a condenser) are very different animals that pick up much more sound of the frequency spectrum. They are traditionally more expensive, but the last years have shown a great increase in, quite honestly, pretty good condensers going for as little as dynamics or just a little more. They also work well if you need to interview someone with only one microphone. You can of course do this with a dynamic as well if you go for the sport journalist approach (that is sticking the mic in the face of the victim), but with a condenser you can just sit at the opposite sides of a table with the microphone in the middle picking up what you both say. If I didn’t own any microphones and was going to buy one for sole podcasting purpose I would definitely go with a condenser microphone.

A proper microphone won’t be compatible with the line-in on your computers built-in sound card. The way to deal with this is with the use of another sound card, an audio interface, or simply using one of the USB microphones that have been popping up lately.

5 responses to “Microphones – the basics”