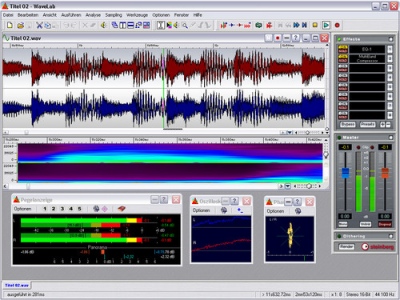 Steinberg are one of the major players in the DAW world. After a couple of bounces back and forth they’re now owned by Yamaha. Steinbergs product ranges from beginner music applications to mastering software to full-blown post production suites. Lets have a look at what could be interesting for podcasters.

Steinbergs best known product is perhaps Cubase which features everything you might need to record and mix music. It’s a bit overkill for podcasting though.

Another well known product is Nuendo. Ever since the release of Nuendo, the relationship between it and Cubase have been varying a little. Generally Nuendo has included pretty much the same things as Cubase but with additional features for post production (video and such).

In the past I’ve said that GarageBand is the obvious low-budget choice for Mac using podcasters. When Steinberg released Sequel I thought it was an obvious rip-off. With that said, I’m not sure Sequel is as optimal for podcasts as GarageBand is. GarageBand includes several features that are great for podcasting, such as easy ducking. Sequel just looks more music oriented to me. I could be wrong though, I’ve never tried it.

I believe the most interesting product would be WaveLab. It’s an audio editor, mastering program, a restoration tool, and is certainly used in broadcast. Its editing features and restoration functionality is way more advanced and developed than most budget editors out there, which makes it a serious choice for someone who wants to spend a little more money and time on recording, editing and mixing their podcast.

There are three versions of WaveLab available.

And finally, the Essential version, which Steinberg themselves claim are ideal for podcasting needs because of a new internet publishing toolkit.

One response to “Steinberg and podcasting”