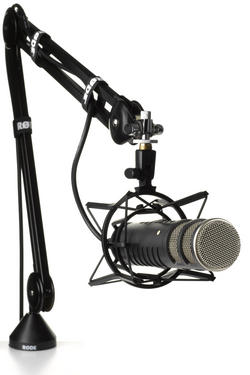 Røde has announced two new microphones. The first one is called ‘Procaster’ (shown above), and is as the name suggests of special interest to podcasters. The second one, the M2 Live Performance Mic is designed for live performance (guess you couldn’t have guessed that) but I will give you the details on that one as well.

From the Røde press release

Featuring a tight polar pattern and tailored-for-voice frequency response, the Procaster is perfect for every application where a great sounding, rugged microphone with superior ambient noise rejection is demanded.

I don’t know how it sounds, but at least it looks great 😉

The Procaster is compatible with the RØDE PSA1 studio arm and PSM1 shock mount, for mounting.

The M2 benefits from RØDE’s extensive experience in crafting premium condenser microphones for studio, live and location use. This new microphone builds upon the foundation set by the TEC award winning RØDE S1.

Combining sound quality equal to that of the finest studio microphones, the M2 features a tailored response to reduce feedback, as well as an integrated shock mounting system to minimise handling noise. A locking on/off switch located on the microphone’s body provides the switching feature required by singers with self-operated sound systems, and yet can be locked off when used in larger, dedicated operator environments.

The M2 is actually a condenser microphone for live use. Condenser microphones are not very often used on stage because of feedback problems and what not, but lately we’ve seen some companies try to change that. Obviously Røde wants to be one of those companies as well.